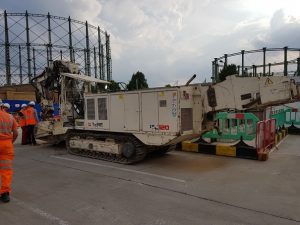 A German mining contractor was in the procurement stage of an upcoming project in Kazakhstan. Having already operated a Terex Schaeff ITC 120 mining excavator since new, they now required a second unit. At the end of the project, the machine would be left at the bottom of the mine, so rather than buy a new machine they opted for used to reduce costs. Omnia was able to procure a suitable unit from a UK contractor – it had previously been working on the Northern Line extension in London.

The machine was a 2012 model with just 2,000 hours. Technical condition and reliability were a priority as repairs and maintenance would be challenging due to the adverse conditions. Omnia facilitated a full day inspection of the machine by two technicians from the Germany company. Once satisfied with the condition, it was agreed that payment would be made once the machine was loaded onto the truck. Representatives from Omnia met counterparts from the German company in London two weeks after the original inspection, and once the machine and all accessories were successfully loaded onto the truck, payment was finalised.