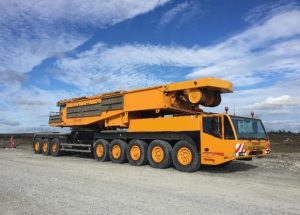 We received an enquiry from a Scottish company for a 600t capacity crane for use on Dundee Port. We managed to source a suitable crane, a Demag TC2800, fairly quickly from a company in Ireland. However, the crane was still working on a wind farm and the deal would have to be structured around completion of the current contract. After these aspects of the deal were agreed we inspected the machine along with the customer and completed the agreement.
To move the machine to its new home in Dundee, the boom sections and attachments need to be taken down from the crane and transported on a number of flatbed trailers, this was accomplished over a number of days. A local company close to the supplier had moved this crane on a number of occasions, with this experience in mind we give them the contract to move the sections. The main unit which weighs almost 100 tonnes was driven across from Ireland over the course of a weekend.
The crane was then re-assembled to make sure everything was present from the packing lists. We also supplied a new hook block for the machine from Holland which was painted to the client’s specifications.